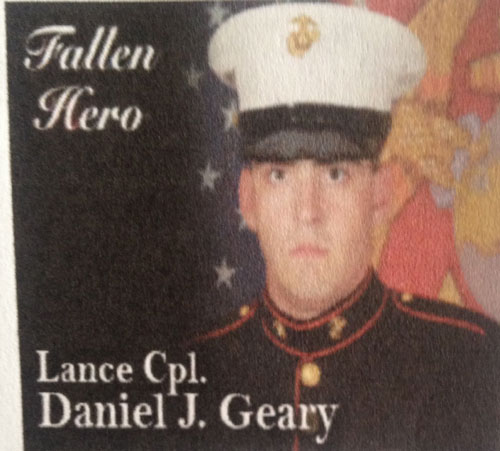 L/Cpl Daniel Geary was born and grew up in Rome, NY.  He was a 2006 graduate of Rome Free Academy.  While in high school, Daniel was a member of the AFJROTC program and proudly joined the United States Marine Corp. in 2006.  He was assigned to 3rd Battalion, 8th Marine Regiment, 2nd Marine Division II, Marine Expeditionary Force, Camp Lejeune, North Carolina.  His life was cut short on March 20, 2009.  His tour of duty was going to be over in May and he planned on coming home and marrying his love, his fiancé, Rachel Paterson who lived in North Carolina.

Daniel loved to have fun and was known as a ‘prankster’, he loved to laugh.  His time with his family was something that was very important to Daniel, with 6 brothers and sisters they all cherished their time together and would most weekends be found at the King Pin Bowling Alley in Rome having a lot of family fun.