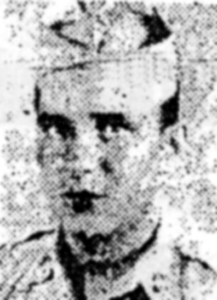 US Army Cpl Joseph Melchiorre was taken Prisoner of War while fighting the enemy near Chochiwon, South Korea on July 12, 1950.  He was forced to march to North Korea on the “Tiger Death March” and he died while a prisoner at Hanjang-ni, North Korea on March 20, 1951.  He was 20 years old when he was taken prisoner and 21 when he died.  His body was not returned.

Cpl Joseph Dominick Melchiorre was from Utica, NY.  He was the son of Mr. and Mrs. Angelo Melchiorre.

Wish to Donate in honor of US Army Cpl Joseph D. Melchiorre?