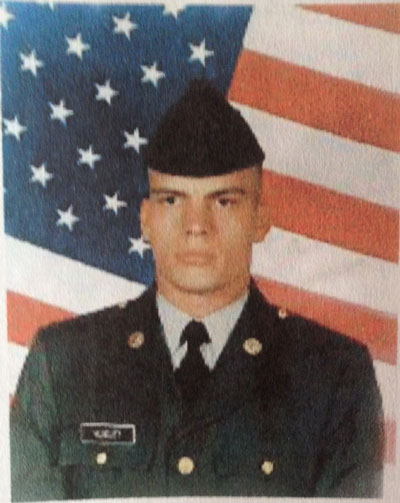 US Army PFC Gregory P. Huxley, Jr. was the first casualty from Central New York in the Iraq War.  He was killed in action in Iraq on April 6, 2003 while serving our country with the US Army, assigned to B Company, 3rd Battalion, 17th Engineer Battalion, Fort Benning, Georgia.  He was 19 years old at the time of his death.

US Army PFC Gregory P Huxley, Jr. was from Forestport and was the son of Gregory Sr. and Mary Huxley.  He had two sisters, Nicole and Rebecca and one brother, Bernard.

Gregory graduated from Adirondack High School.  It was when he was in high school that he decided to enlist in the Army.  He promised his family he would return.   He told them “You’ve got enough room, I’ll be back.”  His father looked forward to his son taking over the family lawn mowing business.  In January of 2003, Gregory came home briefly to pay respects to his loving grandfather who had passed away.  Then he was shipped out to Kuwait.  That was the last time his family saw him.

Gregory was remembered by his friends as someone who never wanted to see anyone sad.  He was friendly, kind, happy and proud.  Just the right qualities for someone who wanted to make a difference in the world.  And he did.  He touched so many lives, even the lives of people who never met him.  On April 17, 2003  NY State Troopers and members of the Syracuse Police Department gathered together to escort PFC Gregory P. Huxley Jr. home.  Due to a communication mix-up the family was not present in Dover, Delaware when their son arrived back from Iraq.  Though there was a full military honor paid to him, his family was not at the ceremony.  The family was then informed that Gregory’s body would be flown to Syracuse and transported to Boonville for a funeral.  The funeral director so touched by this 19 yr. old’s death for our country, contacted Police Agencies and arranged the escort.  When Gregory was removed from the plane, 30 Police Officers lined the tarmac and saluted this young hero.  The procession left Syracuse led by eight Syracuse Police Department Motorcylces and followed by the family and ten NY State Police and Syracuse Police cars.  Every intersection from Syracuse to Boonville was met by a State Trooper standing at attention and saluting the fallen soldier and his family.  When they arrived in Boonville, the church bells began ringing and hundreds of people lined the street holding flags and saluting.  PFC Gregory P. Huxley, Jr. you did make a difference.  We will never forget you.  You have our total honor and respect.  May you always Rest in Peace.

Wish to Donate in honor of US Army PFC Gregory P. Huxley Jr.?