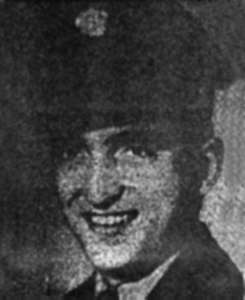 US Army Pfc Richard J. Romanus died of wounds received in battle in the Korean War on August 2, 1950.  He was 20 years old.

PFC Richard J. Romanus was from New York Mills, NY.  He was the son of Joseph and Nagy Romanus.  He had four brothers, Edmund, Raymond, John and Anthony and two sisters, Mrs. Mary Bush and Rosemary Romanus.

PFC Richard J. Romanus’s story is one of the saddest of the war.  He was seriously wounded on August 2, 1950 and placed in a Jeep to be evacuated to a First Aid facility.  What happened then, nobody knows.  The family was told he had been wounded and was either in a hospital in Tokyo or en route back to the States.  The family frantically tried to get in touch with him to no avail.  They were then told their son had returned to duty.  Their letters went unanswered.  The Pentagon could not find him or his records.  It wasn’t until the following year that the Romanus family learned that their loved one had been buried in Korea, Taego Cemetery #2.  The Army, the Pentagon, no one could explain how this happened.  They had never given up hope and now after so many conflicting reports they had to accept that their beloved Richard was gone.

Wish to Donate in honor of US Army PFC Richard J. Romanus?