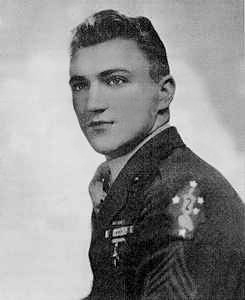 USMC TSGT Walter Carl Borawski was killed in action on January 13, 1953 during the Korean War in the Western Outposts.  He served as a Platoon Sergeant of Company G, Third Battalion, First Marines, First Marine Division (Reinforced).  He was 29 years old.

TSGT Carl Borawski was from Utica, NY.  He was the son of Mr. and Mrs. Joseph Borawski who lived at 310 Jefferson Street.  He had four brothers, Charles, Matthew, Fred and Richard and one sister, Mrs. Helen Szymanski all of Utica.  He was also the husband of Terry Donahue Borawski of Chelsa, Massachusetts.  He had three little sons, Joseph who was 5 years old at the time of his father’s death, Stephen who was 3 and Terry who was 10 months.

Sgt. Borawski enlisted in the Marine Corps on October 27, 1942.  After his basic training he was sent overseas and joined the Sixth Marines, Second Division as a Scout Sniper.  He participated in landing invasions of Tarawa, Saipan, Tinian, Iwo Jima and Okinawa.  Sgt. Borawski was awarded the Asiatic Medal with four battle stars, the Presidential Unit Citation and the Victory Medal.  A few months after he was discharged, Sgt. Borawski reenlisted.

USMC TSGT Walter Carl Borawski was awarded the Navy Cross for giving his life for his country.  Here is the citation:

“The President of the United States takes pride in presenting the Navy Cross (Posthumously) to Walter Carl Borawski (464301), Technical Sergeant, U.S. Marine Corps, for extraordinary heroism in connection with military operations against an armed enemy of the United Nations while serving as a Platoon Sergeant of Company G. , Third Battalion, First Marines, FIRST Marine Division (Reinforced), in action against enemy aggressor forces in the Republic of Korea on the early morning of 13 January 1953.  Participating in a platoon-sized raid on a strongly-defended enemy hill position far forward of the main line of resistance, Technical Sergeant Borawski skillfully maneuvered the assault element under cover of darkness through intense enemy small-arms and grenade fire to the objective.  When his platoon commander was wounded by enemy fire, he immediately assumed command and proceeded to direct the annihilation of the enemy and the destruction of the hostile positions.  Although critically wounded by an enemy grenade and suffering intense pain, he gallantly continued to direct the men of the assaulting squads and to shout words of encouragement to them.  Upon successful completion of the mission, he steadfastly refused evacuation or medical treatment until assured that all casualties, which numbered over half of the assaulting force, were removed from the devastated area.  Succumbing to his wounds while being evacuated to the main line of resistance, Technical Sergeant Borawski, by his indomitable fighting spirit, exceptional fortitude and inspiring efforts on behalf of his comrades, contributed in large measure to the success of his platoon in accomplishing its mission.  His great personal valor reflects the highest credit upon himself and sustains and enhances the finest traditions of the United States Naval Service.  He gallantly gave his life for his country.”